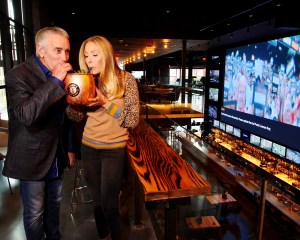 This weekend is the big game! TB12 v. the Patriots (crazy to even put that in a sentence)! If you can’t make it to Foxboro this weekend, here are a few places to watch the game on Sunday.

Sporting Club – Omni Seaport Hotel
Wherever you sit, it’s the best seat in the house with screens surrounding the bar! It’s the perfect place to enjoy an up-scale drink and watch one of the newest and most intense rivalries of Football. The food is not so bad too!

Lincoln Tavern and Restaurant – South Boston
They don’t call it “Southie Sunday” for nothing. Lincoln is not one to pass up when it comes to great places to get a pint of beer and enjoy some Sunday night football. Volume up and projector screens down – you might as well actually BE at the game!

Game-On! – Fenway
Who says hanging out on Lansdowne is only a baseball thing? Watch the game upstairs or downstairs with the projector screen down. Feeling a little competitive? There are also many games to play at this Fenway staple.

Hunter’s Kitchen & Bar – South Boston
Yes, another Southie bar, BUT let it be known… this southern inspired eatery lives up the hype and welcomes any fan to watch the game (we might be a little biased though). And when it’s not game night, be sure to check out it’s live music as well!

The biggest game deserves the biggest screen- well, biggest on the east coast that is! Watch TB12 and the Pats battle it out on a 39.5-foot diagonal LED TV while enjoying game day eats and massive cocktails.

If you can’t go out to watch the Patriots, no worries! These spots are always game for guests to enjoy whatever you sport you may be into.