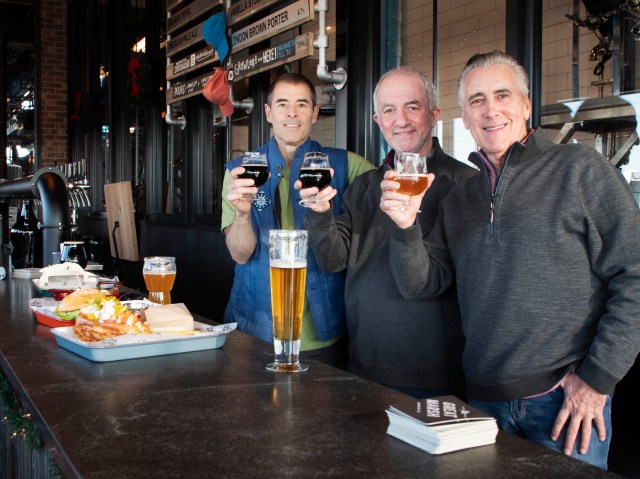 Our nation is home to more than 6,300 independent breweries. And when it comes to New England, Massachusetts fares pretty well for local options. Now is truly the time to be a craft beer lover. The U.S. has more beer styles and brands to choose from than any other market in the world and we’re lucky enough to be home to many of them. Let’s take a look at some of the top craft breweries in Massachusetts.

Trillium’s got a dedicated fanbase, and the lines outside the breweries are there to prove it. They have locations in Canton, Fenway, Fort Point, and a seasonal popup at the Rose Kennedy Greenway. They have an impressive list of IPAs and sours, and a ton of flavor-forward beers, like their stout made with cold-brew coffee.  Even though Trillium is known for their beer, it would be a mistake not to try the food at their Fort Point location. Expect an impressive raw bar menu, duck confit, grilled octopus, meat trays, fried chicken, and even salads and noodle bowls.

all the way in Charlton, about an hour outside of Boston, is Tree House Brewing. Their beers are only available at the brewery itself, but certainly worth the drive and long, early-morning lines. The beers are primarily IPAs with some American Pale Ales or Tree House Pale Ales as well as a variety of stouts. The brewery itself has a very large area with plenty of seating and a friendly staff. Check their social media for food truck availability.

Jack’s Abby’s mission is to create distinctive lagers featuring locally grown ingredients, traditional German brewing standards, and American innovation. The brewery is located in Framingham and beers on tap range from Belgians, Lagers, IPA’s and IPL’s. The atmosphere is young, and lively, with attentive service. You’ll definitely want to order the wood-fired pizza; standouts include the Local Mushroom pizza with leeks, gruyere, and tarragon, and the Potato & Bacon pizza with cave-aged cheese and rosemary.

Situated right on the Essex River and the Great Marsh is Great Marsh Brewing Co. Not only is it a brewery, but a restaurant with delicious eats and great views. In the taproom, you’ll find a great variety of beers. There is a strong emphasis on German-style beers and IPAs, but you’ll also find stouts, porters, and ales. The restaurant serves all kinds of food, like mac & cheese, pork tacos, burgers, and flatbread.

With locations in Everett, Lovejoy Wharf, the Owl’s Nest popup on the Esplanade and in Allston, Night Shift is killing it. As far as brews go, there’s truly a drink for everyone. You’ll find award-winning IPAs, sours, porters, stouts, and a really awesome weisse series. Their Everett location has a beer-garden feel with outdoor seating and rotating food vendors. And it’s dog friendly, to boot. In addition to beer, Night Shift also has Hoot Hard Seltzer, and Night Shift Coffee Beans roasted in Chelsea.

Dining on the Diamond