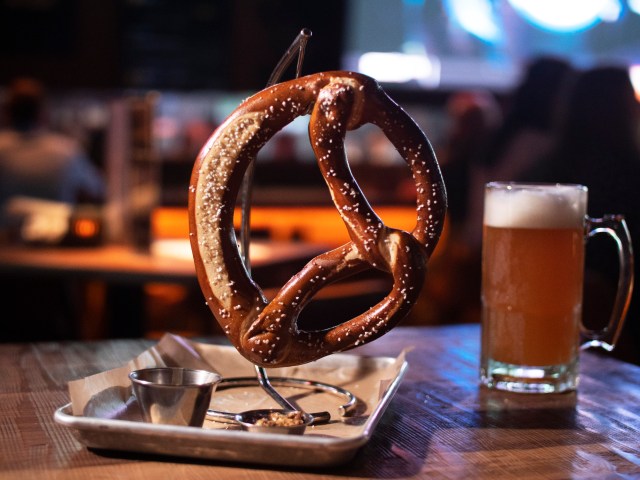 We’re a city rich in history, education, and sports. But also some really cool restaurants and things to do around town. We consider ourselves pretty darn lucky to live in Boston, but lately even more so thanks to the addition of some great eat and play restaurants. Here are a few places where we’re not only eating and drinking, but playing around too. So get out of winter hibernation mode, and into one of our new favorite spots.

If you’re a sports fan and a sucker for history, you’ll love Banners Kitchen & Tap. They are as immersed in Boston sports as one can get by not only being located just a stone’s throw from the TD Garden. Besides the location being legendary, it’s fair to say that the food and games are pretty incredible too. Banners offers Boston favorites like lobstah rolls and chowdah, as well as sports bar staples like pretzels with beer cheese and massive burgers. As for drinks, choose from over 60 different draft beers. We’ve mentioned their 39.5-foot “Dream Screen” before, but Banner’s also boasts a Top Golf Swing Suite with large simulation screen that allows guests to play sports such as golf, hockey, and carnival games. If you want to get in on the action, act fast and book one of their three Swing Suite bays ahead of time.

For a night on the town sans kiddos, A4cade is the place to be where you can “drink, play, and nerd out” as the speakeasy says. Sneak just past the freezer door behind Roxy’s Grilled cheese for arcade games galore. Game range from classics like skee ball, Super Mario Brothers, and Tetris, to modern options like Stranger Things pinball. In addition to all the fun, you get a full menu from Roxy’s and drinks served up in the wildest vessels. What we’re sipping on: The Despacito cocktail maide with Coquito Rum, winter spices, coconut, and milk. As for eats, we’re definitely chowing down on a Hot Honey Bacon Grilled Cheese made with three cheeses, bacon, and hot honey.

Like A4cade, VERSUS is another spot where you can immerse yourself in a mix of classic and modern arcade games. In addition to the arcade and video games, VERSUS also offers board games and Giant Jenga. As you play games with your friends, be sure to take a peek at the pop art murals. But don’t have so much fun that you forget to order from their menu. VERUS offers a menu full of pizzas, burgers, and appetizers like cheesesteak spring rolls with spicy ketchup. One of the most unique bites on the menu is their Flamin’ Hot Onion Rings — quite a step above your average crispy onion. Do yourself a favor and try these, and tell ‘em Chester the Cheetah sent you.

For a New Kid on the Block, we’re psyched to mention Flight Club, the home for “unexpected, ridiculous joy”. Flight Club’s bread and butter is how they foster socialization between you and your friends being a dart game extravaganza with a circus-like theme and extensive menu. Their appetizer menu alone includes over 15 different choices of small bites to share with friends or even coworkers. Have we mentioned how fun an employee team building event would be here? One notable item on their appetizer menu is their Mini Poke Tacos with Ahi tuna, fennel, cucumber, chili vinaigrette, and mandarin oranges. Need dessert? We’re all about their cotton candy.

Kings Dining & Entertainment comes in with a different approach towards “beercade” restaurants. In addition to their large selection of classic arcade games, they also have bowling, darts, pool tables, air hockey, and shuffleboard. In addition to games, events is where Kings Dining & Entertainment really stands out. At one notable event, Strike Out Your Ex, you get to write your ex’s name on a bowling pin and knock them down. How’s that for letting out a little aggression? Even better, at the end of the night, you get to keep the bowling pin. As far as food goes, Kings has a huge menu full of snacks, wings, sliders, tacos, pizza and a ton more. We’re drooling over their Bourbon BBQ burger with bacon, cheddar, bourbon BBQ sauce, and fried onion strings.

Dining on the Diamond