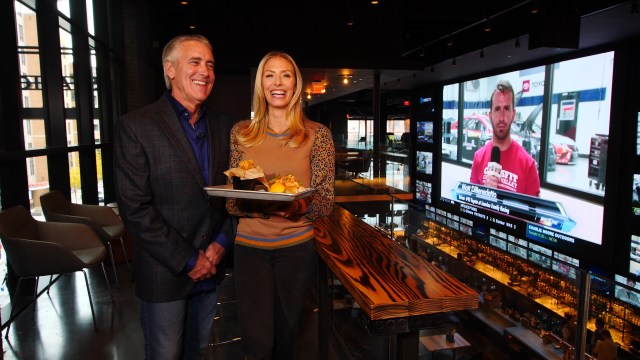 Super Bowl LIV is right around the corner, and with that comes the decision on where to watch the championship game. Thanks to Boston’s thriving sports scene, there’s a variety of places to go. Do you know where you’re headed for the big day? Pick from one of our favorite spots below for a night well spent.

Banner’s Kitchen & Tap is by far one of the top places to watch the Super Bowl this year and for good reason. Not only is there a massive 39.5-foot “Dream Screen” TV to watch the game, but you can choose from over 60 beers on tap. Want a VIP experience at their Super Bowl party? Get their exclusive Big Game experience with premium seating and a set menu of Banner’s wings, Nachos, ESPCO Pretzel & Beer Cheese and Clothesline Smoke Bacon for the table. Pricing is $50 per person with a minimum of 4 guests.

Champions has over 40 flat screens lining the entire back wall, so you’ll really get a good view of the came. It’s conveniently located inside Copley Place, with 36 beers on tap and a grill menu with mouth-watering burgers, wings, and tacos. Want something to last you the whole game? Order the Champions Sampler Tower with 2 pounds of wings, 8 cheeseburger sliders, fully loaded cheese fries, and a stack of onion rings. Bring friends!

City Tap House is a small-chain pub with a rustic feel and is known for their gastropub menu and beer selection. Head to the City Tap House with an appetite and try the famous brick oven pizza paired with a Sam Adams for a true Boston game day experience.

Back Bay Social Club will be offering beer pitchers, buckets of wings, and other game day specials starting at 5pm. The game will be shown in their DownBar lounge on a giant projector screen with surround sound. When you get hungry, go for the Social Burger, made with Pat LaFrieda grass fed black angus, 45 day dry-aged ribeye and short rib and topped with  caramelized onions, aged Vermont cheddar cheese, and Grillo’s pickles.

Starting at 5:30 p.m., Game On will be hosting a Super Bowl party featuring a wing-eating contest and the chance to win two ski passes to Killington Resort in Vermont. You should totally enter the contest, but if you’re more of a pizza lover, order the Sartorelli coal-fired pizza with chicken, bacon, housemade mozzarella, caramelized onions, garlic, and ranch dressing.

This well-known sports bar is packed with flat screens, making it a perfect spot for game day. Diehard fans and athletes alike will have a front row seat to the game thanks to their 50 HD TVs. Get cozy in a booth and enjoy watching the game with some great food and local beer.

The Four’s Restaurants and Sports Bar

The Four’s has been around since the 1970’s and stays true to Boston tradition. Get a feel of classic Boston with memorabilia photos decorating the walls at this beloved sports bar. What’s even more fun is that their signature dishes are named after local legends and sports heroes.